EasyPower offers a complete and accurate solution to short-circuit calculations in three-phase AC systems using the IEC-60909 standard. You can enter equipment data and parameters via user friendly interface.  The results meet requirements of IEC-60909 and match the example provided in IEC TR 60909-4 section 6. The IEC standard terminology is used in the user interface and reports.

EasyPower supports the following four types of short-circuit conditions as per IEC 60909: 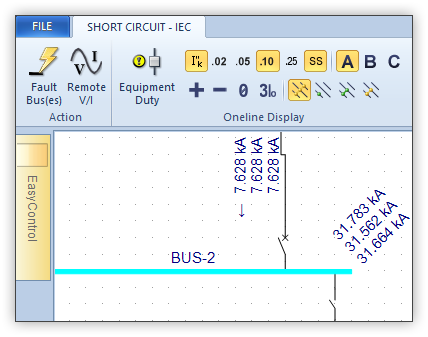 You can view the currents in various formats such as phase currents for A, B and C phases or in symmetrical components: positive sequence, negative sequence, zero sequence and the 3I0 value (3 times the zero sequence current). Corresponding voltages can be displayed at the buses. The values can be displayed in magnitude, magnitude and angle, or in real and imaginary quantities. 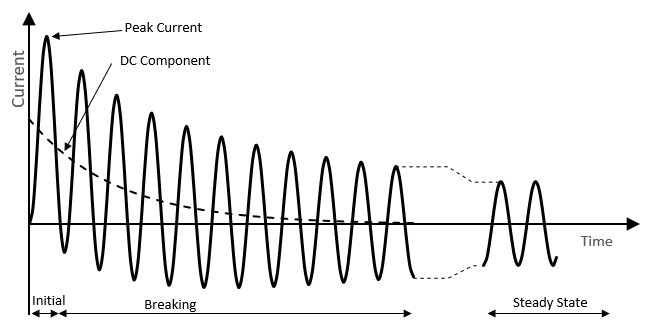 EasyPower uses the equivalent voltage source at the short-circuit location, symmetrical components impedance network, and the voltage factor c as described in section 2.3 of the standard. The short-circuit impedances for electrical equipment are modified using impedance corrections factors that are calculated based on section 3. Impedance correction factors are applied for network or utility (KQ), generators (KG), power stations units with on-load tap changer (KS), power stations units without on-load tap changer (KSO), and two- and three-winding transformers (KT). The resistances for cables, transmission lines and busways for maximum short-circuit current calculations are based on the conductor temperature at 20°C. For minimum short-circuit currents, the resistances are based on the estimated temperature at the end of the short-circuit condition. The resistance to reactance (R/X) ratios for different equipment can be calculated as per recommendations in the standard or entered by users as per the manufacturer data. For minimum short-circuit calculations the motor contribution is excluded. Capacitors and non-rotating loads are not included in the calculations. The program is designed to address short-circuits in meshed networks.

The voltage factor c is used to scale the equivalent voltage source in the calculations to account for variations in the system voltage. This factor is also used in calculating impedance correction factors. EasyPower uses the following c factors as the default for maximum and minimum short-circuit conditions. You can modify these values as needed in the short circuit options.

The transformer correction factor KT for two winding units with or without on-load tap changer (LTC) is calculated as follows per section 3.3.3 equation (12a).

The correction factors for three-winding transformers with or without LTC are calculated using the following equations.

The synchronous generator impedance correction factor KG for generators without unit transformers is calculated as follows per section 3.6.1 equations (17) and (18).

The corrected impedance ZS and impedance correction factor KS for whole power station units with OLTC are calculated as follows per section 3.7.1 equations (21) and (22).

The corrected impedance ZSO and impedance correction factor KSO for whole power station unit without OLTC are calculated as follows per section 3.7.2 equations (23) and (24).

The initial symmetrical current is calculated based on section 4.2. This is the first step to obtaining most values. Subtransient impedances are used for rotating machines with the impedance correction factors. As described in the methodology the solution is obtained using the equivalent voltage source at the short-circuit location, symmetrical components impedance network, and the voltage factor c.

EasyPower calculates the Peak currents (ip) based on section 4.3 of IEC-60909-0 standard. The following methods are supported for meshed networks as per section 4.3.1.2:

The 1.15 factor is used only when the impedance R/X ratio of any branch contribution to the short circuit location is equal to or greater than 0.3.The product 1.15κ(b) is limited to 1.8 for low voltage and 2.0 for high voltage.

The method described above is for 3-phase short circuit. For unbalanced short circuit (line to line, line to earth, and double line to earth), EasyPower provides the option of using the factor κ based on the unbalanced short-circuit Thevenin impedance equivalent R/X ratio or based on the 3-phase short-circuit at the same location. The implementation is as per sections 4.3.2 through 4.3.4 in the standard.

For rotating machines the current contributions to short-circuit decays over time. Breaking currents are calculated at 0.02s, 0.05s, 0.1s and 0.25s based on section 4.5 using the meshed network approach. Current decrement factor µ is applied to increase the reactances of generators and motors, and an additional current decay factor q is used for asynchronous motors using equations (70) and (73) respectively. µ is set to 1 when the ratio I"kG/IrG is less than 2. 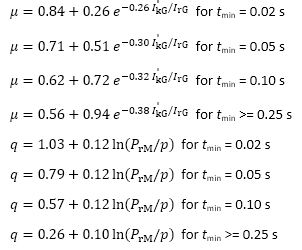 Asymmetrical values can be used with protective devices that respond to the asymmetrical currents.

Currents flowing through sources, cables, lines, transformers and other equipment are also calculated. Voltages at remote buses are also provided. These remote currents and voltages are useful for relay setting.

IEC 60909-4 section 6 provides a sample calculation as a benchmark test for software programs to compare. The comparison of results is summarized below.

Figure 4: Ratings for HV breaker in project file loaded from the library 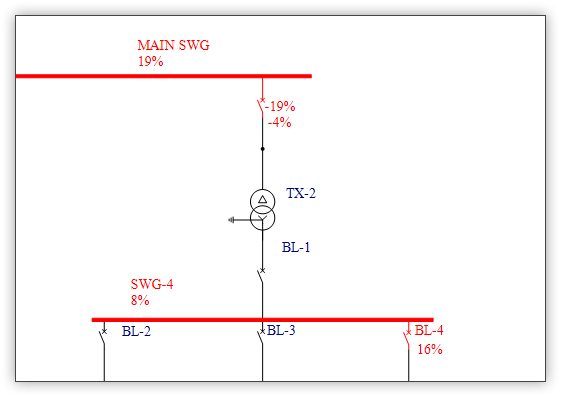 Short-circuit on any bus results in voltage drop in other near buses in the system. You can set a voltage sensitivity threshold in the options such that any bus with voltage below this value will be highlighted red in the single line view and shown in the voltage sensitivity report. 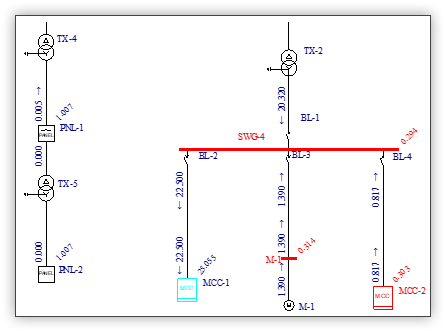 Figure 6: Highlighting of buses when voltage is below threshold 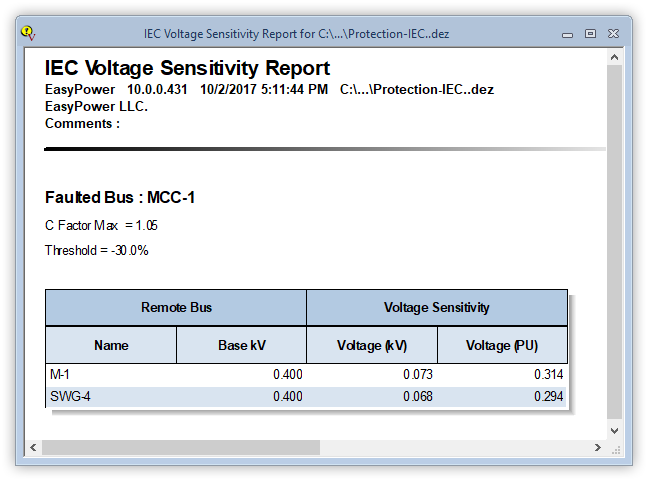 Figure 7: Voltage sensitivity report for buses with voltage below threshold

The short-circuit calculation provides the phase angle of the branch currents and the bus voltages at various equipment. The phase angles displayed are relative to the applied equivalent voltage source being at zero angle. Transformers having different winding configurations, such as a delta connection on one side and a star (wye) connection on the other side, have a designated shift in the phase angles of currents and voltages. For remote buses and branches across transformers, a phase angle shift is applied accordingly by the short circuit calculations.

IEC 60076-1 standard specifies clock number notation and their respective phase angle shift for transformers. EasyPower provides the necessary phase angle shift of remote voltages and currents for IEC rated transformers in the IEC short circuit analysis. For transformers with delta and start (wye) winding connections, the clock notations 1,3,5,7,9 and 11 are supported in the database. These have 330, 270, 210, 150, 90, and 30 degrees phase shift respectively based on the high voltage side taken as the reference. For ANSI rated transformers, a fixed +30/-30 degrees phase shift is applied. 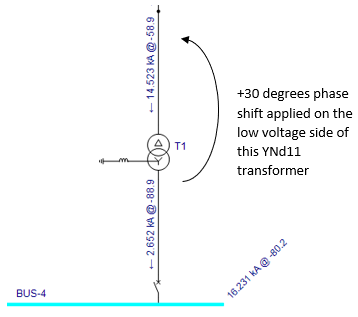 The IEC 60909 short-circuit results are integrated with the protective device coordination tools in EasyPower. The following features are supported: 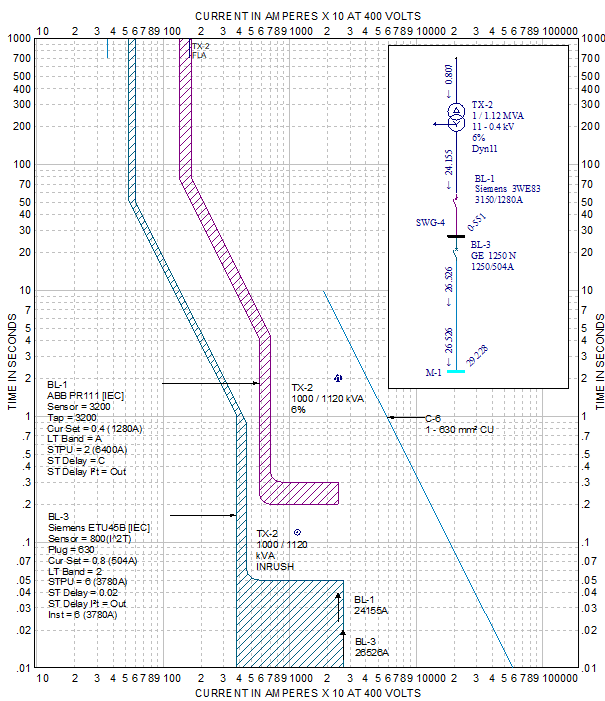