Lightning is a spectacular display of electrical forces in nature and easily recognized by the general public to be potentially hazardous. The detailed work engineers provide to design lightning safety for facilities and various structures may not be as easily recognized. The purpose of this article is to promote knowledge related to lightning protection and the study of a lightning protection systems (LPS). In this article we illustrate XGSLab SHIELD module’s processes for evaluating an LPS.

Within a cloud, electrostatic charge formation occurs resulting in electric fields that affects the electrical gradients of the Earth’s surface. Hundreds of kV per meter produce step leaders typically emanating from the cloud approaching the earth. As this step leader approaches the striking distance, an upward leader will extend from the surface or elevated points toward the step leader. 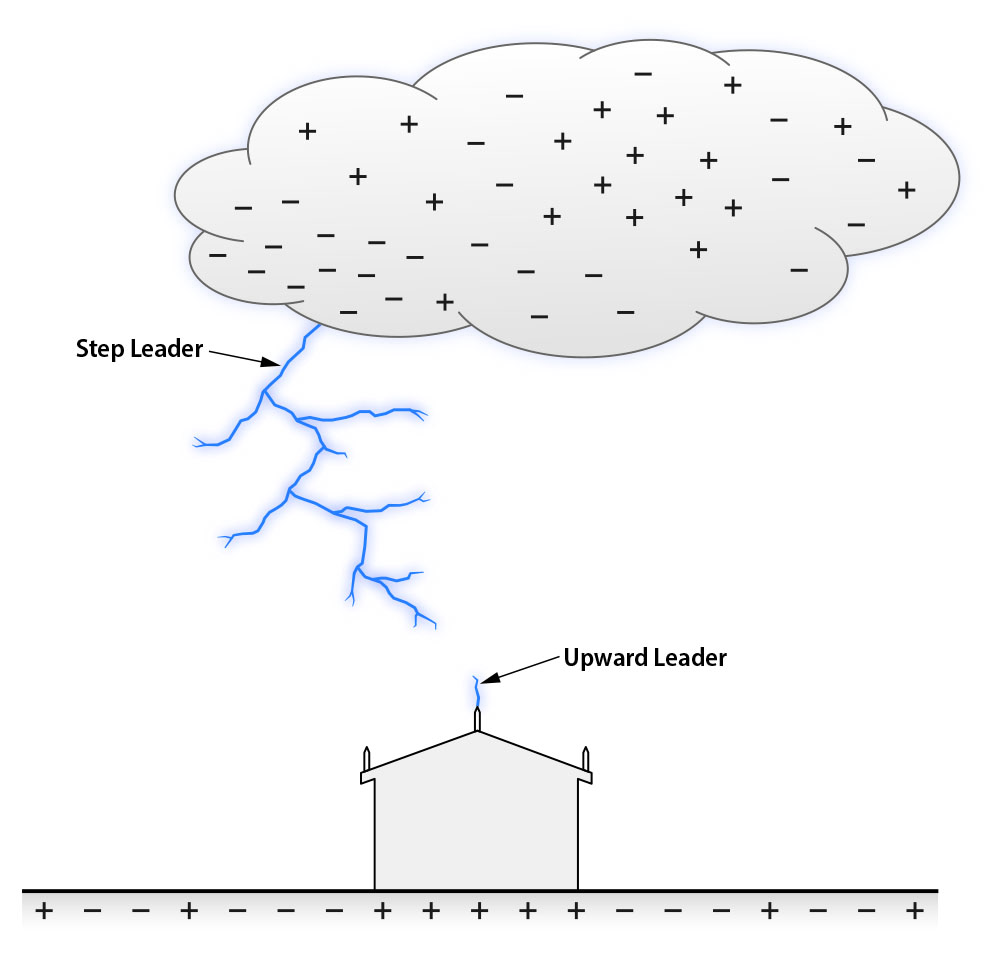 The return stroke is the primary discharge in a lightning event, associated with an extremely bright flash and high current. This process is visible in the slow motion lightning video where step leader progresses until the connection is made between cloud and earth. There are multiple strokes associated with lightning, but this lightning attachment process is what is used to develop an effective LPS.

When approaching an LPS from engineering perspective, there are generally three aspects to consider:

The risk assessment is key to determining the importance of implementing an LPS and calculating the proper level of design. This is primarily a facet of the lightning flash density of the region, the recipient’s consequences of being struck (both financial and safety), and the facility's physical arrangement and construction. Once the determination is made to implement an LPS, the second stage is designing where lightning may strike.

Lightning shielding may be developed using simplified geometric methods that are categorized by placement of lightning rods, masts, and shields at periodic intervals to provide a zone of protection. As these are simplified methods, several constraints limit their effective application; fortunately, more complex important systems have an engineered LPS design typically evaluated with a 3D software, such as XGSLab SHIELD. We will discuss this in greater detail later in this article.

Determining how lightning stroke currents propagate through a system requires detailed time domain analysis such that the engineer or researcher can view the transient propagation of current and voltage through a medium. A common application is to evaluate the possibility of backflash from lightning stroke current reflecting from a poor tower grounding, as illustrated by the XGSA_TD image below.

It is important to be aware of and differentiate these aspects of lightning protection evaluations, but the focus of this article is on the evaluation of the LPS shielding.

Shielding a facility or area from lightning is generally developed using geometric methods or electrogeometric models (EGM). As expected, the simplified geometric methods have more constraints on their application and likely are not suitable for structures that exceed certain heights or more complex geometries. To protect critical structures, more robust EGM methods are advised to better protect from hazardous lightning events.

EGM is synonymous with the Rolling Sphere Method (RSM), which involves a process to calculate a striking distance associated with the peak lightning current. This methodology originated from critical infrastructure in the power industry and allows the correlation of striking distance to peak lightning currents that could exceed the phase conductor’s insulation levels, thereby initiating power system faults. The strength of the RSM is that it is easily conceived and broadly applicable to various complex structures.

The striking distance is used to create an imaginary sphere. The RSM method simply indicates that objects that the sphere contacts may need additional protection, while areas untouched by this rolling sphere are protected. It is important to note that a larger strike radius corresponds to larger peak current, implying smaller strokes can infiltrate the protected zone. Typically, the smaller sphere yields greater levels of shielding, but the goal is to provide an efficient design that permits sufficiently low magnitudes to infiltrate while protecting from those that cause significant damage.

XGSLab SHIELD is a modern application of the EGM, including both the RSM and Eriksson EGM lightning shielding evaluation methods. As a full 3D software system, it is simple to determine if an LPS is successfully protecting the recipient structures as shown by this LPS protected volume:

Structures outside the protected volume need the additional protective components added. Engineers can evaluate their LPS design often with less time and more accuracy than with the simplified methods previously discussed. Additionally, these LPS shielding studies are often well documented to affirm that critical infrastructure is shielded and lives are protected, which may offset insurance costs.

XGSLab is one of the most powerful software for electromagnetic simulation for power, grounding and lightning protection systems and the only software on the market that takes into account International (IEC/TS 60479-1:2005), European (EN 50522:2010) and American (IEEE Std 80-2000 and IEEE Std 80-2013) Standards in grounding system analysis.